Be Prepared To Give An Answer 1st Peter 3:15

In the same year as my last contribution to The Lutheran Difference Series I was granted the wonderful honor of contributing to the book Theologia et Apologia [Theology of Apologetics]: Essays in Reformation Theology and its Defense Presented to Rod Rosenbladt, edited by Adam S. Franciso, Korey D. Maas, and Steven P. Mueller (Wipf and Stock Publishers, 2007).

I look back on the fact that it was a great joy for me to honor both Rev. Dr. Charles Manske (in his 1999 festschrift) and Rev. Dr. Rod Rosenbladt (in his 2007 festschrift). These two servants of God were instrumental to my undergraduate formation at Christ College Irvine (before it became Concordia University Irvine). Dr. Manske inculcated a zeal for the gospel that was second-to-none, and his spectrum of scholarship inspired me to strive to be as well-rounded as possible. Dr. Rosenbladt demonstrated precision of thought that honored God with the mind as well as the heart and soul. Additionally, his skill in apologetics was matched by his Christ-centered focus.

Here is the book: 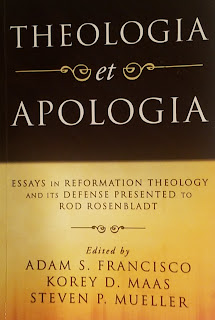 My specific essay is the book's anchor (the last essay): Apologetics as Pastoral Theology.

It should be said that Lutherans are not as high on theistic apologetics as are some from other Christian traditions. The renown evangelical apologist William Lane Craig, for example, has powerfully demonstrated how theistic apologetics can buttress biblical teaching on creation through philosophical and scientific considerations (see his expansive work for example on the Kalam Cosmological Argument for the Existence of God). In all of this, however, no one comes to know the Gracious God who sends His Son to save people from sin and death (a fact that Dr. Craig knows full well of course which is why -- I would venture -- he also invests a great deal in defending the Resurrection of the Lord Jesus Christ). As for theistic apologetics, I like the reminder put forth by Alister McGrath who corrects the tendency for folks to refer to theistic arguments as "proving" God (see his work Intellectuals Don't Need God and Other Modern Myths). They don't. McGrath certainly sees their value, but only as "pointers" toward what is real.

That is theistic apologetics, while important, are also quite limited.

Lutheran Christian apologetics, however, has typically focused on two main areas and these are examples not of theistic apologetics, but Christian or special-knowledge/revelation apologetics (that which cuts to the chase and goes to Holy Scripture, not by the way to engage in circular reasoning but to demonstrate how the Scriptures themselves correspond to the rest of what we know from history):

1) The reliability of Sacred Scripture.

2) The historical evidence for the Resurrection of Jesus Christ.

These two areas are most vital in the realm of apologetics (giving rationale answers/a reasonable defense for the faith):

But does such "evidentialism" automatically imply that mere men are attempting to do what only the Holy Spirit does through the communication of the saving Gospel?

Luther offered this explanation for the third article of the Apostles' Creed:

"I believe that I cannot by my own reason or strength believe in Jesus Christ, my Lord, or come to Him; but the Holy Spirit has called me by the Gospel..."

So how does one come to saving faith? By the Holy Spirit calling through the Gospel.

So where does this leave Christian apologetics?

Some would say therefore that Cornelius Van Til was correct: apologetics is presuppositional. It only effectively serves the one already possessing saving faith (the person who presupposes the faith). For such a one, apologetics strengthens the faith of the believer.

But is this correct? We don't recommend Van Til's position though this does not deny that Christians also benefit from apologetics.

On the other hand, going into my essay, I was also concerned about a certain pragmatism surrounding apologetics. Too often we hear of a 1-2 approach describing the relationship between apologetics and witnessing to the Gospel. The idea is something like this: "Apologetics will clear the path or remove obstacles, so that the Gospel may be effective." This sounds like a departure from Luther. It sounds like evangelistic synergism.

So if this is how evidential apologetics is going to be used, then again, maybe Van Til was right.

I still disagree with him while also not going along with the assumption that evidentialism is proffering a 1-2 approach.

Thus, finally, we come to my essay. My argument is that the elements in Scripture typically viewed as the basis for evidentialism are framework or delivery manifolds of the saving Gospel itself. For example, words that demonstrate historicity are embedded in the proclamation that is the power of God unto salvation. These are inextricable. Indeed, it is ONLY the Gospel that the Holy Spirit uses to draw people to Christ and when this is proclaimed, it is proclaimed in complementary fashion with God-given reason, logic, historical grounding, and sound, sensical communication. When the Risen Christ came to the hiding disciples, He invited them to see and to feel that His was the body raised from having been dead. His words were giving them life and they were words inherently marked by evidence. Again, the two are conjoined.

Apologetics are, therefore, very much for the one yet to know the Gospel, the one without faith in Christ. In this sense Lutheran apologetics holds to a fundamental evidentialism as opposed to pre-suppositionalism. Lutheran theology points to the Gospel as the power of God unto salvation (Ro 1:16), and when this Gospel is proclaimed, the elements of apologetics serve the Gospel. It has been said that philosophy is theology's handmaiden; in much the same way, apologetics serve evangelism even while it (apologetics) is a sub-category of systematic theology proper. Still, it serves the Gospel and without the Gospel, it doesn't accomplish much of anything. When used, however, to deliver the Gospel, apologetics knows its place and we should thank God for the field.
Posted by Alfonso Espinosa at 12:05 PM